Prior to 1965, migration to the USA from South Asia was relatively small-scale.  Examples of this small-scale migration include that of Punjabis to California around the end of the 19th and beginning of the 20th century, leading to a distinctive, thriving community in this area.  In 1965 the so-called 'Hart-Cellar' Immigration and Nationality Act opened up the possibility of migration to the States for suitably skilled South Asians, amongst others.  After this, a fluctuating flow of professionally qualified migrants have entered the States.  The quality of Higher Education in India meant that migrants from these areas were particularly able to take advantage of post-Hart-Cellar opportunities, with many Indians entering the medical and engineering sectors, and more recently the booming IT sector.  Pakistani and Bangladeshi migrants have also entered the States, but in lesser numbers than Indians.  Overall, the South Asian population of the US in the 2010 census was about 3.8 million. 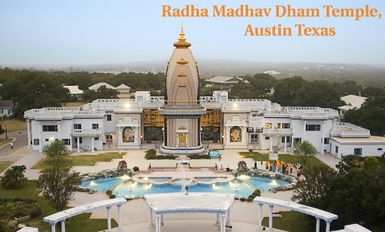 Radha Madhav Dham
This exhibit looks at a Hindu temple in Austin, Texas, exploring its social location in Texas and its transnational links.  The exhibit has been created by Rosie Fahey, Sam Jones, Catherine O'Hara and Lauren Stacey. Click on the image to load the prezi.