During the late 18th, the whole of the 19th and the first half of the twentieth century, South Asia was dominated by European colonial powers, principally Britain.  One aspect of this colonial domination that is sometimes overlooked is the increased mobility of South Asians during this period.  Both domestic and international migration increased greatly.  In this section of the museum, we explore the various forms of international migration that occurred during the colonial period, configured largely by the 'webs of Empire' which meant that different parts of the world were connected by strong economic ties, forged by the transnational logics of colonialism.  One of the most important forms of migration during the colonial period was through the system of 'indentured labour', whereby labourers signed up for long contracts to work on plantations in the wake of the abolition of slavery, often experiencing conditions very close to slavery in the process.  Between 1834 and 1917, approximately 1.5 million South Asians travelled to plantation economies in the Caribbean, Mauritius, Fiji, East and South Africa and other places under this system.  The colonial world also led to other forms of mobility, including the settlement of many Indians in East Africa where they worked as merchants, traders and on a range of infrastructure projects. 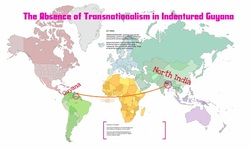 Absence of Transnationalism in Guyana
This exhibit explores Hindu religious practices in Guyana, linking them to patterns of migration and settlement in the 19th Century.  The exhibit has been created by Thomas Hogarth and Ivan Taylor.  Click on the image to enter the exhibit.