According to the 2011 census, the number of people residing in England & Wales who perceive themselves as ethnically South Asian is over 3 million (the figures for Scotland are not yet available; the figures for Northern Ireland are small).  This population results largely from large-scale migration from South Asian during the late 1950s and 1960s.  For a variety of reasons (including and especially the dynamics of 'chain migration'), the vast majority of these migrants came from specific areas of South Asia: Mirpur in Kashmir, Sylhet in Bangladesh, Gujarat in India, and various parts of (both Pakistani and Indian) Punjab.  In addition, the South Asian presence was augmented by 'twice migration' from East Africa in the late 1960s and early 1970s, when Africanisation policies in Uganda, Kenya and Tanzania (countries which had previously been part of the British empire) led to the migration of South Asians to Britain. Many of these migrants also had strong family links to Gujarat.  These patterns of migration have informed the development of the South Asian population in the UK. 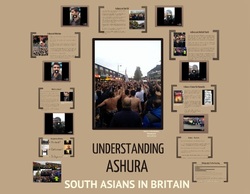 Understanding Ashura
This exhibit looks at the Shia festival Ashura as it is performed in Britain.  It includes footage of the Ashura festival on the Wilmslow Road in Manchester in November 2012. The exhibit has been created by Alice Carter, Stephanie Dermott and Hannah Thornton.  Please click on the image to enter the exhibit. 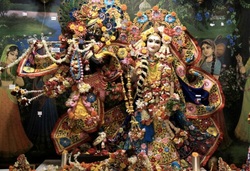 International Society for Krishna Consciousness
This exhibit looks at ISKCON in Britain, with a particular focus on the ISKCON temple in Manchester.  The exhibit has been created by Serena Adams, Lucy Allen, Chelsea Calvert and Jade Springys. Please click on the image to enter the exhibit. 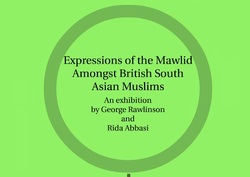 ﻿﻿Expressions of the Mawlid amongst British South Asian Muslims﻿﻿
This exhibit looks at Mawlid - that is, celebrations of the birth of the Prophet Muhammad - amongst South Asian Muslims communities in Britain.  The exhibit highlights changes in the form of Mawlid in the context of developing Islamic consciousness and the emergence of new generations.  The exhibit has been created by Rida Abbasi and George Rawlinson.  Please click on the image to enter the exhibit.