There are significant South Asian populations across especially northern Europe, with large numbers in particular in the UK and the Netherlands as a result of colonial connections.  The South Asian population of the continent has been boosted since the 1980s by the influx of Tamils from Sri Lanka, fleeing the civil war that raged on that island from 1983 to 2009.  During the civil war period, Sri Lankan Tamils fled not just to Europe, but to many other countries including India and Canada.  It is estimated that roughly one third of the Tamil population of Sri Lanka has left the island since independence in 1948, the vast majority of these during the war years.  Europe is now home to about 400,000 Tamils, with significant populations in particular in Germany, France, Switzerland, the UK and Scandinavia.  The Tamil refugee population is generally young, politically conscious and highly aware of the transnational dimensions of the Tamil diaspora.  They are predominantly Hindu (there are also significant numbers of Christians), although the forms of practice they follow sometimes provides a challenge to the dominant understanding of this religion in European contexts. 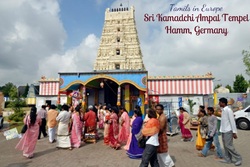 ﻿﻿Tamil worship in ﻿﻿Germany﻿﻿﻿﻿
This exhibit explores the Sri Kamadchi Ampal Hindu mandir in Hamm, Germany.  This is the largest Tamil Hindu temple in mainland Europe.  The exhibit has been created by Olivia Brady, Keely Jackson and Katy Robinson.  Click on the image to enter the exhibit. 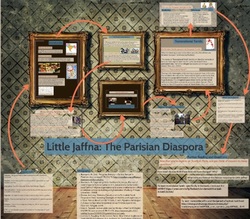 Little Jaffna in Paris
This exhibit explores the Tamil community in Paris, France.  The exhibit gives background information on the community, and focuses on the Ganesh Chaturthi festival, the largest festival held by the Paris community annually.  The exhibit explores this festival in comparison to others (in Sri Lanka, and in Germany), and poses questions about similarity and difference.  It is interesting to view this exhibit in conjunction with the above exhibit on the Sri Kamadchi Ampal mandir, as there is also some interesting detail on festivals here.  The exhibit has been created by Will Clift, Jorden Cocker and Alex Webb.  Click on the image to enter the exhibit.